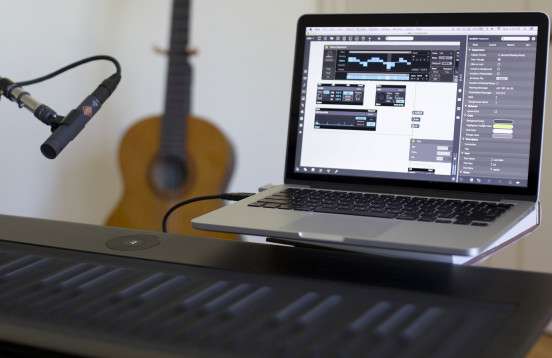 David Zicarelli is founder and CEO of Cycling’74, a software company developing Max, the digital signal processing software environment. For nearly ten years David has used JUCE to build and commercialize Max. In an interview with the JUCE team, David tells us about Max, his next steps for this highly sophisticated cross-platform interactive software, and the integral role of JUCE in facilitating it. “It’s so brilliantly designed it makes us write better code just to interact with it,” David says.

What is Max, and how did it start?

Max was born out of the desire to give musicians and artists the ability to create software using intuitive interactive tools. It was a way to remove the limitations of traditional music software without forcing musicians to learn to code.

Max is now a complex environment with hundreds of different types of objects covering a wide variety of applications. But we try to maintain a simple idea: everything can be controlled with a simple stream of numbers. When everything is a stream of numbers, it means any kind of media or controller can talk to any other kind of media or controller. What’s happening under the hood can be very complex with protocols, operating system drivers, or hard math. But to the Max user it’s just numbers going from one place to another. This lets you control audio parameters with a user interface, an LFO, data from the internet, or even another program you write in one of many languages.

We have three main customer groups starting with universities. Max is taught in universities all over the world. Max started in music, but it’s increasingly used in art and architecture programs. Our users are also individual practicing artists and musicians who develop their work in the software. They might use Max to build an installation or a system for live performance with the software. Third, we’ve worked with Ableton on “Max for Live,” which is a way to extend Ableton Live – their DAW – in all sorts of cool ways. Max for Live could also be thought of as Live for Max, in that whatever you make with Max you can use Live to automate or compose with.

What were the challenges developing Max?

We share the challenges of any complex software application written over decades with millions of lines of code. In other words, what isn’t a challenge?

But more seriously, we have to understand the nature of a wide variety of disciplines and technologies well enough to figure out ways to make them easy for artists but still broadly programmable. Inevitably this leads to tricky compatibility issues. The underlying world keeps evolving, yet the model we present to users needs to stay relatively stable.

Another difficult challenge is that performance problems are almost impossible to anticipate, as they arise from what users do. Our performance problems are not just about the absolute time it takes to do something. They are also about balancing responsiveness with processing power. With a traditional DAW you can compute a lot of what happens in advance because you’re playing a set sequence of events. But in Max, anything could happen at any time; you can’t predict what someone will do to an interactive piece. Yet at the same time, people expect Max to do as much stuff as they can in software that is not so spontaneous and interactive. Sometimes it doesn’t feel fair!

What made you choose JUCE?

To me, the reasons for choosing JUCE are less important than our experiences over the past nine years that have made us so happy with JUCE. How we use it is a bit unusual. Unlike most software that has been written with JUCE, we didn’t start from scratch. We used JUCE to rewrite large parts of Max from its old and clunky OS-specific style. To do this, we had to build a layer on top of JUCE that talked to the part of our software we couldn’t change. We used this layer to rebuild our user interface, but at a higher level we made Max objects out of pieces of JUCE. There’s an object in Max called jit.cellblock, for example, that lets you display data in a spreadsheet-like form. This object is actually a subclass of a JUCE TableListBox. There are many Max objects wrapping other parts of JUCE that we use to build the actual UI of the software. I suspect someone familiar with JUCE could look at Max and figure out what classes all of these secret objects use.

Sometimes we use JUCE as a kind of glue to put our own lower-level stuff into the rest of the application. For example, in our new version Max 7, we’ve created a CEF container to display web content inside a Component. This lets users build interfaces that combine web technology and our more traditional JUCE-based interface elements. Everything acts as a Component and plays together. I don’t really know how this is even possible, but it works! We use JUCE as a modular structure to organize our low-level work as well as a way to abstract platform dependencies. It is so brilliantly designed it makes us write better code just to interact with it.

How did you come across JUCE?

Max started its life as a Mac-only program back in the 1980s. As it became increasingly complex, we wanted to port it to Windows so we licensed a library called Mac2Win that essentially emulated the Mac OS on Windows. ProTools was also ported to Windows using this library, by the way. This library was very expensive, and it ported the pre-OS X version of the Mac OS, so about ten years ago we started looking for another cross-platform option. A coworker found out about JUCE, and within a few days he had an example of how it would work for us.

Tell us more about Max 7.

With our new version, we’ve focused on ways we can make Max feel simpler. For example, you can just drag and drop media files to play them now, instead of having to know about the objects that do it. We’ve also simplified and modernized the user interface fairly radically.

What are the next steps for Cycling ‘74 in terms of Max and Gen?

Increasingly our customers want to build software for a variety of contexts and environments beyond the desktop. That’s why I’m excited about Gen as a forward-looking technology [that we’re developing].

Gen is a way to create high-performance audio and video processing using a graphical interface. It looks like Max, but the underlying implementation is entirely different. Instead of the user interface manipulating data to implement your program, Gen writes out a little C++ program, compiles it, and executes it each time you make a change. This means you can “code” interactively while listening to what your algorithm does. If you want to use that algorithm in other software, you can export it to C++ code that has no dependencies on Max itself. In Gen, you are describing how a single sample of audio will be processed or synthesized. We take care of everything else that turns that sample algorithm into optimized audio code.